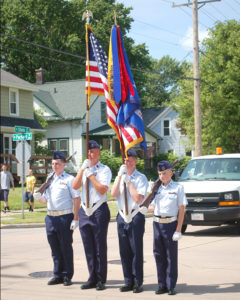 Youth must be 12 years old and attending the sixth grade and not older than 19. CAP cadets experience aviation in a way few other youth do. As a CAP cadet you will fly in airplanes, soar in gliders, learn to lead, wear the Air Force uniform with pride, and learn to rescue missing persons and locate lost aircraft.

Cadets progress through the program by participating in activities and through study. Physical fitness, leadership laboratory, moral leadership and aerospace education comprise the curriculum of the Cadet Program. As the cadets pass their achievements, they earn rank, awards and/or certificates.

CAP also offers the young adult a wide variety of National level activities to attend, after the cadet has attended a basic wing encampment. They can participate in Flightline Operations at EAA Airventure, learn to fly powered aircraft or sailplanes, go to Space Camp, and more. Because the United States Air Force recognizes the value of the Cadet Program, each cadet who receives the Gen. Billy Mitchell Award and chooses to enlist, enters with the advanced rank of Airman First Class.  The United States Coast Guard now also recognizes cadet achievement with advanced pay and rank upon enlistment.